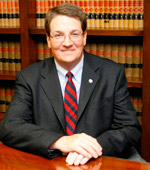 Mr. Corrigan has more than thirty years of experience in a broad variety of civil litigation. He is admitted to practice before the United States Supreme Court, the Court of Appeals for the Seventh Circuit, the United States District Court for Northern District of Illinois, including its trial bar, the Illinois Supreme Court, and all trial and appellate level courts in Illinois. He has handled cases in DuPage, Kane, Kendall, Will, Cook, and DeKalb Counties. He is experienced in alternative dispute resolution, including arbitration and mediation.

Mr. Corrigan has been elected to the Fellows of the America Bar Association. The Fellows is limited to one third of one percent of lawyers licensed to practice in each jurisdiction. Members are nominated by Fellows in their jurisdiction and elected by the Board of the American Bar Foundation.

Mr. Corrigan was one of the class counsel in the Lockformer class action litigation, regarding contamination of ground water affecting residential properties in Lisle, Illinois, and personally negotiated the favorable settlement on behalf of the class ($10,000,000), as one notable example of the successes his clients have achieved with his representation.

As a Rotarian, Mr. Corrigan serves Rotary International District 6450 as District Governor for the year 2020-21.